Setting the Stage for the Presidential Election

The stage is now set for a very important presidential election coming up in November.  Looking back at the 2016 election and the large market swings that occurred then, and an arguably more polarizing political and economic climate today, its easy for people to question how they should prepare and react to what could be a dramatic campaign and election.  Should investors fear either party winning the White House?

I think we're all aware of how important it is to vote, no matter which side of the aisle you're on and which candidate you support.  However, we must remember how important it is to separate personal and political feelings from financial plans and investments.  We must always be wary of claims that one candidate or another will hurt the stock market.  Its likely been said about every candidate in every election looking back in recent history.

Since it is natural to wonder how markets tend to respond, not only around elections, but also post election periods, I wanted to include some perspectives.  Looking at market returns from past periods of Republican vs. Democrats - the big takeaway?  There really is no clear pattern.  I would argue, as usual, that taking a long-term perspective is the right approach, as the below chart tells us.  On average, market returns have been positive both in election years and the subsequent year. 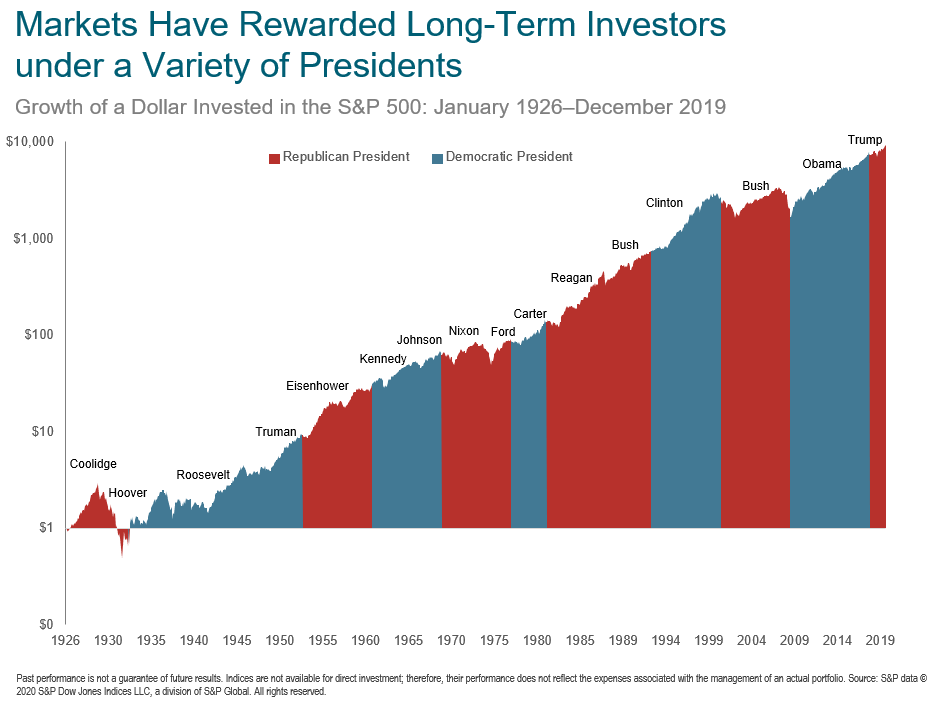 Down below, i've included a link to additional slides relating to this topic.  They go into even more detail outlining specific years, terms, presidents, etc.

With August in the rear-view mirror now, market returns looking back in the month were downright amazing, especially considering all that has been happening this year!  The DOW, S&P500 and NASDAQ all experienced their best August since 1984.  This year has probably been one of the best examples of sticking to your long-term investment goals.  Those that stuck to their investment plan during the market troubles in the spring have since been rewarded, as we experienced the fastest bear market ever, and the second fastest bear market recovery ever!  A great example to remember going forward. 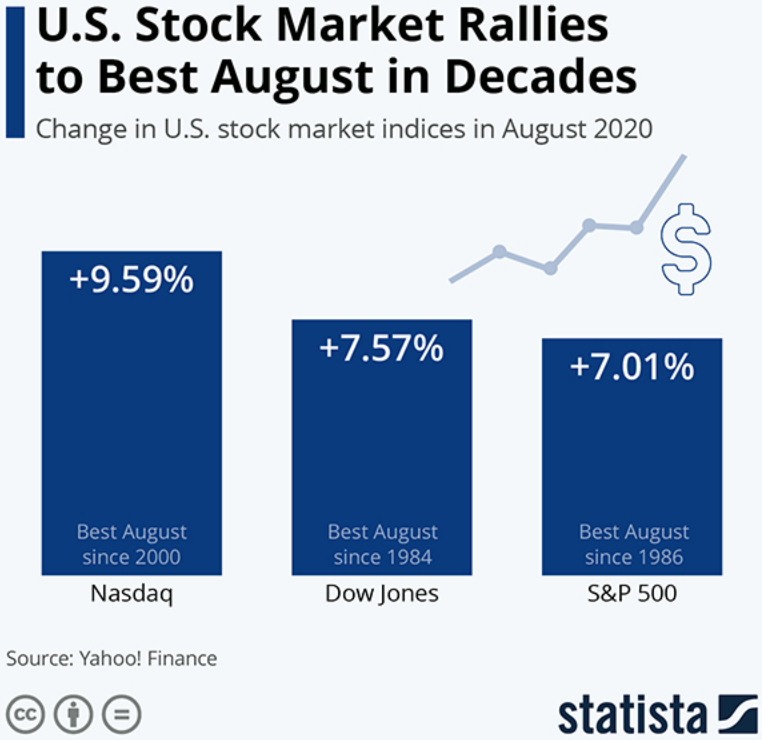 Just a quick note for those of you that made IRA contributions for the 2019 tax year.  You probably received your IRS form 5498 this week.  This is a standard tax form sent by the custodian every year, typically sent in May after the tax filing deadline.  With the tax filing deadline and IRA contribution extended to July this year, these forms were also pushed out until August this year.  Just be sure to file those away with your other 2019 tax forms for record keeping purposes.

I know this has been an interesting and challenging year.  Please reach out any time with questions, thoughts or comments, as i'm always here to help!

I hope you have a great Labor Day weekend!

Highlights: What History Tells Us About Elections and the Market

Investors often wonder whether the market will rise or fall based on who is elected president. The data show that capturing the long-term returns of the capital markets does not depend on which party controls the White House.

Starting with the last week in July and for the first three weeks of August, investors celebrated that the S&P 500 had advanced for four consecutive weeks, culminating with it passing its pre-COVID peak from February 19th on August 17th.

When the Magic Happens

This is a story about when big innovations happen.  Not how, but when. And to some extent, why.  Hopefully you find it counterintuitive at first before it quickly seems obvious. That’s how most important ideas work.  And hopefully you’ll see why 2020, for all the hell its brought, could be the new beginnings of something promising.

No Relief in Sight as Bike Imports Can't Match Demand

Bike imports are up significantly in recent months, according to U.S. Department of Commerce figures released Wednesday. But importers are still struggling to make up for reduced shipments earlier in the year combined with unprecedented demand from retailers and consumers.

Any golfer knows, this is as good as it gets, and this golfer did it at age 4!