With coronavirus fears growing over the past few months, millions of homeowners have been receiving surprisingly good news as mortgage rates continue to hit new record lows.

As of April 2, 2020, the national average rate for a 30-year mortgage had fallen to 3.33 percent, with an average of 0.7 points paid, according to data from Freddie Mac.1 Mortgage rates have plunged back to the lowest levels in decades, yet overall mortgage applications were down 17.9% in the week ending April 3, 2020 according to the Mortgage Bankers Association.

Since then, mortgage rates have continued to stay historically low, giving homeowners a potentially big savings potential through the ability to refinance their mortgages at even lower rates!

Why Are Mortgage Rates Falling?

Since March, COVID-19 concerns have ignited volatility in the stock market. At the same time, bond markets have rallied as traders rush to purchase safe-haven assets such as U.S. Treasuries, which are backed by the United States government and a are considered safe havens even in tumultuous economic climates. Since investors are really competing to lend the government and other borrowers money, such bond prices rise, causing interest rates to fall.

Recently, yields on the 10-year Treasury note fell to a historic low of 0.676 percent, extending their break below 0.7 percent for the first time ever.2 While that means lower borrowing costs for the government, 10-year Treasury notes are the key benchmark for 30-year fixed mortgage rates, having a direct impact on their performance. 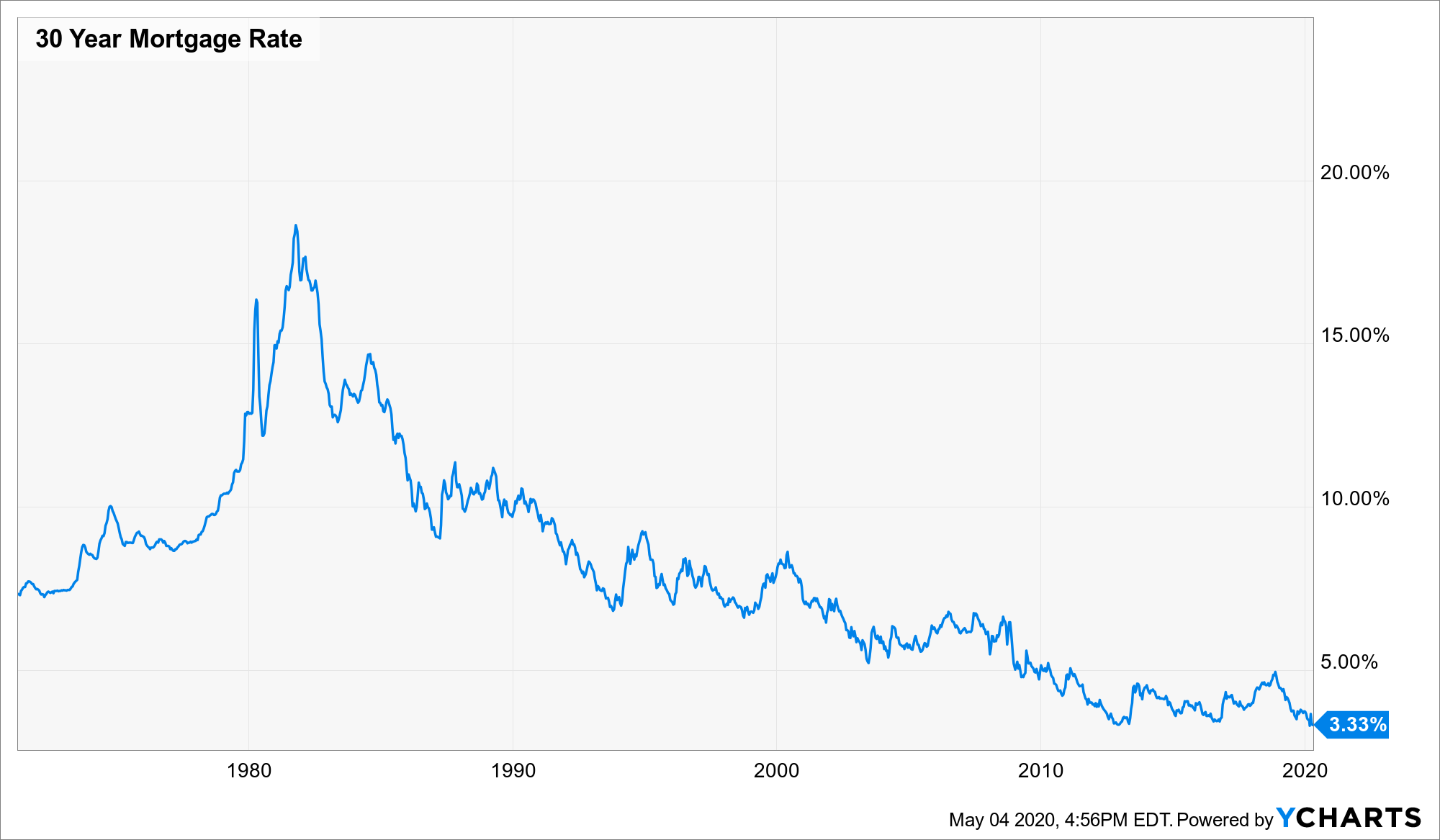 For the larger part of 2019, mortgage rates fell as U.S. economic growth waned and investors began to predict that the Federal Reserve would cut benchmark short-term interest rates. But, in the fourth quarter, rates rebounded slightly before sliding sharply again this January. As of March 6, 2020, the average 30-year rate fell to an all-time low of 3.29 percent and mortgage applications jumped 30 percent from the week prior, according to the Mortgage Bankers Association.3

But then, as March continued on and the COVID-19 pandemic worsened, demand for refinance loans dropped, reversing the previous weeks surge.

What to Expect Moving Forward

Because mortgage rates have been sliding, you may be considering whether to refinance your loan. In short, no one really knows how interest rates will react as we continue to face the COVID-19 pandemic and the future ahead, which can make it difficult to make such a weighted decision.

According to CME Group’s FedWatch, traders are suggesting a 100 percent chance of a rate cut at the Fed’s April meeting, but that doesn’t mean mortgage rates will continue to decline.4 In 2019, mortgage rates fell steadily throughout the spring as investors anticipated a rate cut. It wasn’t until early August that they actually rebounded slightly as banks acted on their interest rate policy.

It’s possible that Treasury rates could continue to fall further, especially as fears associated with slowing global economic growth increase. But while nothing is preventing mortgage rates from falling further, another notable decline would place them in truly uncharted territory. It’s important to keep in mind that things continue to change at a rapid pace. So if you are considering refinancing, crunching the numbers now is a good idea.

Should You Refinance Your Mortgage?

Taking advantage of today’s low mortgage rates could save you thousands over time, but it may not make sense for every homeowner. According to real estate data and analytics firm Black Knight, it may only be worth the effort if you are able to replace your existing mortgage with one that is at a 0.75 percent lower rate.5 This is because the cost of refinancing can reach a few thousand dollars once you factor in fees for appraisals, title searches, etc.  You should also consider the term of your mortgage if you refinance.  If you're several years into a 30 year mortgage, you may end up paying more interest over the life of the loan by going back to a 30 year loan, even if the rate is reduced.  Consider a shorter-term, such as a 20 or 25 year term to reduce the amount of interest paid over the life of the loan.

Black Knight estimated that 14.5 million homeowners would be good candidates for refinancing if mortgage rates fell to 3.25 percent, those of which may be characterized as homeowners with 30-year mortgages who have 20 percent or higher equity in their homes.5 Because payments on a typical fixed-rate mortgage are focused on paying off interest rather than principal in the early years of the loan, it might take a few years to reach that equity threshold if your down payment was lower than 20 percent.

All in all, refinancing might make financial sense, even if you purchased a home fairly recently. Millions of homeowners nationwide are currently considered to be good refinance candidates.  If you're unsure that a refinance is right for you, consider speaking with a well qualified mortgage professional, or reaching out to a fiduciary financial planner as they can help you in determining not only if a refinancing makes sense for your own financial position, but what mortgage term is right for you.