There’s an old saying that often gets thrown around that goes, “the only sure things in life are death and taxes.” While that is a pretty true statement, given what has taken place with congress last month, the later of the two just gave us something new to get our arms around! Since the start of the election, President Trump and the GOP have thrown around many promises, many of which had or have been changed, abandoned, extended or whatever else.   Although, after 31 years since the last tax overhaul when Reagan was in office, the current tax reform has been completed.

So, what does this mean? Well, it means that a lot of people have questions about how this may impact them and their families.  Business owners are wading through the changes to determine how they will be affected.  It appears as though the new legislation will be more a number of “tweaks,” but will introduce a number of tax planning complexities for individuals, families and businesses.  Oh, and just to throw another wrinkle, some of these “tweaks” included a sunset provision after the year 2025.  Hopefully those that read my previous blog post 9 Ways to help reduce your 2017 tax bill...and 1 bonus consideration took advantage of some of those elements before they disappeared!

Let’s begin to break this down and summarize what it means to most taxpayers.  Remember, this is a list of many of the changes, but not all.  Oh, and by the way, I’m not touching the political components of this because, well…you understand.  Let’s begin:

Tax Brackets:  While Trump’s original plan was to reduce the number of tax brackets, the final plan didn’t quite play out that way.  The 2018 income limits for all tax brackets will be as follows, compared to what they were for 2017.   The good news for most is that the new tax brackets should produce a reduction in marginal tax rates for most tax payers.  Aside from the 10 and 35 percent brackets, most rates received a 1 to 4 percent reduction.  As an example, a couple earning a combined $150,000 would save nearly $4,000 per year! 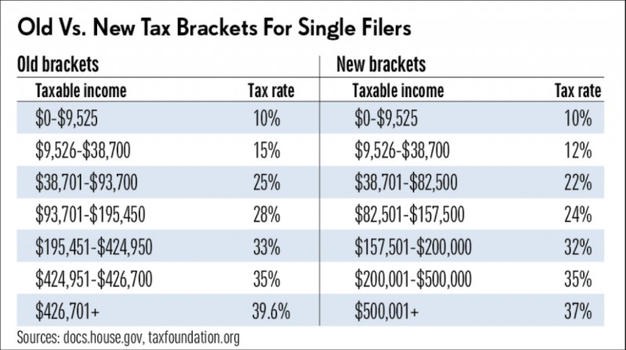 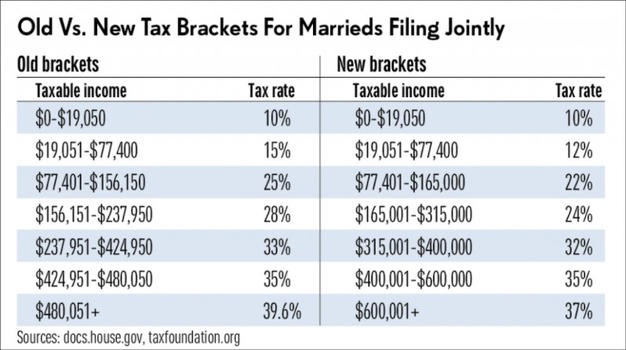 Standard Deduction Increased:  The standard deduction is being nearly doubled from $6500 to $12,000 and $13,000 to $24,000 for Single filers and Joint filers respectively.  This means a tax savings for those that don’t itemize deductions (think mortgage interest, property taxes, charitable donations, etc.) and/or those with more modest incomes.  Those that had itemized deductions will have a much higher barrier of deductions to cross before exceeding the standard deduction.  This likely means the vast majority of taxpayers who itemize will now default to the standard deduction, meaning most will no longer be able to take the deduction of mortgage interest and/or property taxes and charitable donations.

Itemized Deductions:  While the limit to itemized deductions has been eliminated, the reality is most filers won’t be itemizing going forward due to the increased standard deduction.  For those that will have itemized deductions greater than the standard deduction, they will need to take note that the SALT deductions (State and Local Taxes) are now going to be capped at $10,000.   This will affect those with previously large mortgage interest at SALT bills, and especially those that live in cities and states with high income taxes.  Additionally, the mortgage interest deduction has been increased for loan amounts from $750,000 to $1,000,000.

The unfortunate part of this change for many, will be the lost ability to deduct more modest charitable contributions.  Again, because of the increase of the standard deduction, most tax payers won’t have enough in the way of itemized deductions to exceed the hurdle of the increased standard deduction.   Hopefully this change doesn’t negatively affect charities and non-profits in too big of way.   I do believe those that are charitably minded will continue to make contributions as they always have, but in terms of capturing a deduction, there would likely need to be some more planning done to maximize deductions for contributions of larger dollar amounts, ie.  Donor Advised Funds.

Doubling of the Child Tax Credit:  This is good news for those with kids! The child tax credit is being doubled from $1,000 to $2000 per child.  The nice thing about this is it’s a credit, not a deduction, which means more tax savings! Additionally, the income phaseout to claim the credit is also being increased from $75,000 and $110,000 for single and joint filers, to $200,000 and $400,000 for single and joint filers respectively.

Expanded Medical Expense Deductions:  In the past, to be able to deduct any medical related expenses, they would have had to exceed 10% of your Adjusted Gross Income (AGI).  With this tax bill, the medical expense deduction has been temporarily expanded to deduct expenses exceeding just 7.5% of AGI.  Not only will this be the case for 2018, this is actually been put in place retroactively to include tax year 2017 as well! Note, after 2018, it will revert back to 10% AGI threshold.

Capital Gains and Qualified Dividends Rate:  The rates for long term capital gains preferential treatment will remain relatively the same.  Tax payers who fall into, or below, the 10 and 15 percent ordinary income tax brackets will continue to receive a 0% rate on long term capital gains.  What is a little different here (they like to make things difficult!) is that the 0% LT Capital Gains rate will end at $38,600 for individuals (and $77,200 for married filing jointly), even though the two bottom brackets end at $38,700 and $77,400.  Tax payers in the 25 through 35 percent brackets will pay a 15% capital gains rate, and those in the top bracket will pay a 20 percent rate.  For most people, this shouldn’t significantly change much when triggering long term capital gains.

529 College Savings Plans:  Another good piece of news is the ability to use 529 college savings plans has been expanded beyond simply college expenses.  It used to be that these plans could not be used to cover private elementary/secondary school expenses, but this tax bill has eliminated that restriction.  It will be interesting to see how states respond to this change who had participated in a state tax deduction for contributions.  They may not have expected this change, and I’ll be interested to know if they may pull that provision going forward

Qualified Business Income 20% deduction for Pass Through Businesses:  This is an interesting one! For pass through business entities, think LLC’s, S Corps, Sole Proprietors, the new tax bill introduced a 20% deduction for Qualified Business Income.  This essentially means that certain pass through entities will effectively be taxed only 80% of their income.  Now, there are some caveats (big surprise) to this that should be noted.  Certain businesses that characterize themselves as “Specified Service Businesses,” such as consultants, health, law, accounting fields, financial services and a few others will have limits before this deduction begins to be phased out at $157,000 and $315,000 of income for single and joint filers respectively.  There are other provisions to be aware of here depending on the size and type of business, but too specific to go into length here.  What’s interesting about this provision is some have expressed concern about W2 employees leaving their jobs and contracting back to their previous employers as independent contractors.  I doubt this will happen to a large degree, but it is interesting to consider because for the first time, self employed individuals will have a lower tax rate than employees doing similar work.

AMT:  Ah yes, the Alternative Minimum Tax.  This is probably a lesser known tax to most people, and understandably confusing no less.  In summary, the AMT was an additional tax that went alongside the income tax.  It requires some tax payers to essentially calculate their tax twice, once with the AMT rules and once with the normal income tax rules.  Tax payers would pay the higher amount.  It was introduced initially to prevent abuse by very high-income earners, but unfortunately, AMT thresholds were never indexed for inflation until a few years back, which means millions of middle income tax Americans began to be impacted by AMT.

This covers some of the provisions in the new tax bill that will affect most filers.  Again, most families could see some benefit here, but it ultimately depends on your individual situation, and how diligent you may be with any actual tax planning.  Also, with many of these provisions sun-setting after 2025, many benefits could be lost.  Unfortunately, that part is rather uncertain yet, and we’ll have to see what shakes out.

For now, I hope this helps you understand aspects of the tax bill a little better.  You may not be alone in looking for answers to your own situation, my best advice would be to seek out professional assistance to better understand your own circumstances, and take some time to do some actual tax planning.  Who knows, you might be surprised with what you learn or save!

Does any of this bring up any additional questions? Things you hadn’t considered? Consider it an opportunity to reach out as I’m here to help!

Do you want to bring a new level of attention to your financial decisions? Reach out to me at ryanmohr@claritycapitalmgmt.com or schedule a complimentary consultation here.

Disclaimer:  This article is provided for general information and illustration purposes only.  Nothing contained in the material constitutes tax advice, a recommendation for purchase or sale of any security, or investment advisory services.  I encourage you to consult a financial planner, accountant, and/or legal counsel for advice specific to your situation.